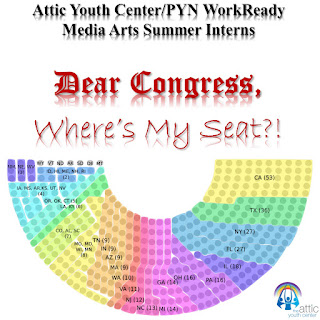 In this episode,
hosts discuss the lack of congressional seats available for intersectional voices
and how that negatively shapes the progression of the future!

or CLICK HERE!
Posted by The Rainbow Experience at the Attic Youth Center at 2:47 PM No comments:

Episode 5: Black Women vs. The Media 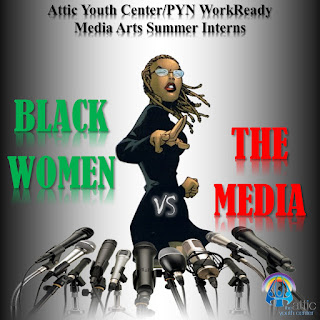 In this episode,
hosts discuss the plight of black/brown womyn bodies
within the current media climate
in addition to their erasure/ownership of their inherent cultural identity.

or CLICK HERE!
Posted by The Rainbow Experience at the Attic Youth Center at 2:42 PM No comments:

In The News: "Dear Congress, Where's My Seat?" Commercial

VIDEO PRODUCTION
TS Hawkins
Posted by The Rainbow Experience at the Attic Youth Center at 11:19 AM No comments:

Email ThisBlogThis!Share to TwitterShare to FacebookShare to Pinterest
Labels: Episodes 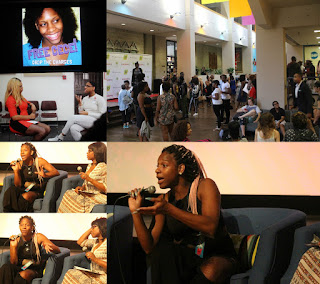 I had the honor of being Youth Press Correspondent on behalf of The Attic Youth Center for the 5th Annual BlackStar Film Festival. When I walked into the International House where the festival had taken place on August 7, 2016, located on Chestnut Street in West Philadelphia, the ambiance was more than welcoming. A beautiful woman who wore a tag labeled “BlackStar Volunteer” directed me to a table where I was given my very own  ticket to one of the best films shown at the festival, “Free CeCe.”

Free CeCe is a documentary film directed by Jacqueline Gares and co­-produced by trans actress, writer, and LGBTQ+ advocate Laverne Cox. This film is about the life of then 23 year old CeCe McDonald; a young transgender woman of color who survived a brutal attack around 12:30am on June 5th, 2011 in Minneapolis, Minnesota while walking to the supermarket with a group of friends. While in route they passed a local bar, The Schooner Tavern. A group of white, cis-gender males and females were standing outside the bar and began yelling transphobic and racist slurs at CeCe and her friends. They called them ‘f*ggots,’ ‘n*ggers,’ and ‘chicks with d*cks.’ CeCe chose to stand her ground and fight back. The situation at hand did not turn out pretty. One of the men who attacked CeCe and her friends, Dean Schmitz, was stabbed and later pronounced dead at the scene. A pair of scissors CeCe pulled out for protection had been determined to be the murder weapon. Not only did she leave the scene with glass in her cheek [from one of the female attackers smashing their drink into her face] but CeCe left in handcuffs. She was taken to the hospital after her arrest where she received 11 stitches. CeCe was left in a room alone for three hours waiting to be interrogated then placed in solitary confinement in Minnesota Correctional Facility-St. Cloud; a men’s prison. CeCe refused to accept a first­-degree manslaughter charge, so the prosecutors charged her with second-degree intentional murder which held a 40 year sentence. With the help of her legal team and protesters, CeCe was able to accept plea bargain of second-degree manslaughter; a deal that only held a 41 month prison sentence. CeCe, as said in the film, “had to do what she had to do.” Fortunately, CeCe served only 19 months in prison and was released on January 13th, 2014.

In this film, I learned about CeCe McDonald’s struggle with being mistreated in the justice and penal system. Her act of self ­defense against a man who was presumed to be a racist, violent, and transphobic turned into an unnecessary trial. The community came together without hesitation forming protests. Chants and signs reading “Free CeCe” and support for her spread world­wide; Berlin, Paris, Italy, Bangalore, India, Glasgow, Scotland, and Canada, were truly inspired by CeCe’s story.

I was very eager to see the film and hear the full story from CeCe herself aside from what I researched. Watching this film drove me to think more of the lives of trans women and understand the law enforcement's lack of understanding and respect for transgender citizens. It was eye opening to see the lives of trans women of color and trans people in general being brought to light . In the film political activist, scholar, and author Angela Davis spoke with CeCe McDonald and stated “Trans people are caught in violence between binary genders.” As said on the official Free CeCe documentary website http://www.freececedocumentary.net/, “FREE CeCe! is hugely significant for its indomitable spirit and bold confrontation of the systematic injustice that lingers throughout America (and the rest of the world).” Thus, the one concern I had with the film was the lack of conversation on allyship; more information on how to adequately support and educate each other on how to improve the institutional oppression of the trans community.

Unfortunately, I didn’t get the chance to ask CeCe McDonald questions because she had to rush to another event. If given the opportunity I would ask, "With the way she sees trans woman’s murder cases handled, if she had been murdered that day, would the perpetrator have gone to prison? Why or why not?" I also wanted to ask more about her experience in the men’s prison. The film talked about the way they wouldn’t let her wear certain clothing and dictated the way she wore them. I wanted to know if she received transphobic slurs from the correctional officers or other inmates and how that made her feel. My last question for her would have been, “When she found out about the worldwide protest that was going on, how that made her feel? Did that release a great amount of depression and stress off her shoulders?”

In light of trans lives not being supported in the media, I strongly feel everyone should educate themselves on transphobic cases they may hear about to help spread awareness. People should actively support not only the lives of  trans women of color but all trans lives and work on better understanding the oppression that trans women face. I’d like to thank The Attic Youth Center Media Arts facilitator TS Hawkins for selecting me as the Youth Press Correspondent; giving me the opportunity to see the mind altering, Free CeCe film, and giving me a new point of view on the unfair imprisonment and injustice for trans woman.

*More about CeCe McDonald
Chrishaun ‘CeCe’ McDonald born May 26th 1989 is an African American Trans Woman from Minneapolis, Minnesota. Her name came to light after her inspiring story on an attack she survived but received unfair treatment within the criminal justice system. CeCe and her story intrigued many activists such as Laverne Cox, Angela Davis, Janet Mock, Marc Lamont Hill for Ebony.com and many others.
Posted by The Rainbow Experience at the Attic Youth Center at 4:42 PM 2 comments:

Super excited to be a Screening Partner
during the BlackStar Film Festival
for the film "Free CeCe"!! 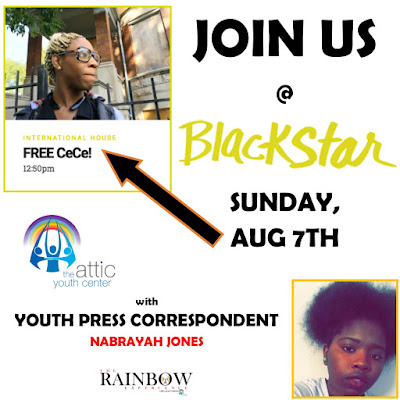 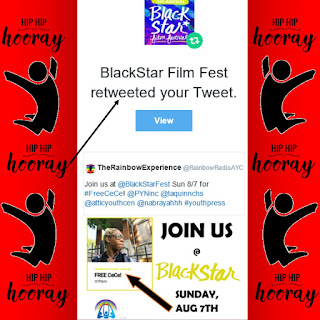 Posted by The Rainbow Experience at the Attic Youth Center at 4:57 PM No comments:

Email ThisBlogThis!Share to TwitterShare to FacebookShare to Pinterest
Labels: Youth

Posted by The Rainbow Experience at the Attic Youth Center at 3:39 PM No comments:

In The News: "Black Women vs. The Media" Commercial!

"Black Women vs. The Media"
a radio podcast by the AYC/PYN WorkReady Media Arts Summer Interns

Click to listen
and ‪#‎staytuned‬ for their upcoming episodes!

Posted by The Rainbow Experience at the Attic Youth Center at 5:22 PM No comments: