Episode 7: A WALK DOWN RAINBOW LANE
In this episode, the hosts discuss how the LGBTQ+ community is excluded from the current school curriculum. This episode challenges the educational system to implement a diversified course of study for all students all year long.

Episode 8: THE MASC WE WEAR
In this episode, hosts discuss the pressures of toxic masculinity and its effect on a community at large. This episode aims to encourage individuals to embrace all of their identities each and every day!

Episode 9: MEDIA VS REALITY/THE QUEER LIFE
In this episode, hosts explore the misrepresentation of the LGBTQ+ community on the silver screen!
Posted by The Rainbow Experience at the Attic Youth Center at 1:23 PM No comments: 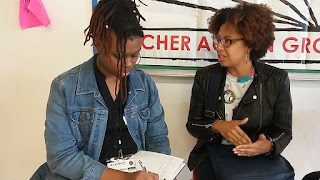 The 8th Annual Educator's Conference, hosted by T.A.G. (Teacher Action Group), was held at the Folk-Arts-Cultural Treasure Charter School located at 1023 Callowhill Street Philadelphia, PA. It served as a melting pot of inspirational figures to share experiences, opportunities and enlighten the gathered audience on school related issues. The theme of the conference was “Crawl Spaces for Liberation” and it was fascinating how every attendee found a way to be engaged. Despite the focus being geared towards educators, the event found various ways to ensure that all participants gained new knowledge by the end of the day. The conference began with a contemplative air as the hosts presented their speeches about life, the nation’s current civil unrest, and the power of activism. While wrapping up introductions, the hosts called upon the audience to think about what impacts they’ve made in their respective communities. After vibing with the audience for a few minutes, the hosts let the panel lead the way. Panelists, Jalyssa Ortiz, Isabel Dalakishvili, Mari Morales, Lillian Hentz, Katrina Clark, Imani Sanders-Rasul, and TS Hawkins had the task of self-introduction and explaining how they create their own “crawl spaces”. To say the panelists lit a fire in the hearts of the spectators would be an understatement; it was an inferno of hope and motivation.

There was an array of workshops to attend during this one-day conference but we decided to sit in on “Queering the Classroom Through Everyday Actions” led by the wonderfully charismatic Maddie Luebbert. Maddie Luebbert is a Philadelphia based graduate student who worked as a student-teacher this year. The workshop began with a free-write guided by questions surrounding anti-queer language and our reactions to it. Next, we introduced ourselves and were asked to give one word to summarize our feelings about anti-queer language in the classroom. We heard a variety of emotions including anxiety, frustration, and disgust. Some felt powerless, conflicted, concerned, and surprisingly the word reflective was mentioned. After talking about our individual classroom encounters, we re-enacted three scenarios in which students in the classroom used anti-queer language or inquired about queer related topics. Through this activity, everyone could rotate within the positions of the student, the teacher, and the observer. After each scenario, we talked about how it felt and what we could have done differently. Throughout this workshop, everyone learned different techniques and ways to incorporate LGBTQ+ language into the curriculum. Additionally, we learned not to rush to judgement when other students use anti-queer language. Some students may not be aware of how negative language impacts the LGBTQ+ community. Thus, when a critical moment arises, the collective school community should take the time to guide each other through the process of understanding how to treat each other respectively. These scenarios set the tone for the rest of the workshop. A freeform discussion arose amongst the educators, student-teachers, and youth about intentionally incorporating LGBTQ+ history and language into the classroom without making it “stick out” from what the curriculum mandates. It was refreshing to feel more equipped to return to our communities and educate others on crafting a holistic curriculum.

“None of Us are Free Until We are All Free” was the second workshop we attended with two energetically hilarious facilitators, Hazel Edwards and Gianna Graves, from The Bryson Institute at The Attic Youth Center. The Bryson Institute focuses on providing trainings to the city to educate the community about the oppression of minority groups. The theme of this workshop seemed to be a “call to action” for Intersectionality; the ultimate key to liberation and equity for all. Hazel and Giana broke down the complexities and social dynamics of oppression, by presenting three diagrams they created to explain each concept with simple terminology. First, The Tree of White Supremacy focused on racism --which led to white privilege-- and colorism --which led to light skin privilege and oppression. From one of the tree’s trunks was a branch labeled "White Folks". The "White Folks" branch split into two other branches labeled "Racism" and "Color Blindness". Hazel and Giana explained that racism and color blindness are effects of white privilege. This tree metaphor helped the workshop participants understand that racism was rooted in white privilege. Eager to learn more, it was then, Hazel and Giana handed out their second diagram, The Heterosexism Power Grid. This graph had roads of oppression and privilege but focusing on society’s disparity on sexuality. "Heterosexuality", the title of the power plant, had two main roads titled "Oppression" and "Privilege". The road to “Oppression” had four sub-roads labeled "Biphobia", "Queerphobia", and two "Homophobia" routes all leading to the “House of Sexuality”. The "Privilege" road led to the “House of Heterosexuality”. Brimming with all this newfound knowledge, Hazel and Giana unleashed their final diagram, The Patriarchy Pipeline which focused on sexism and cissexism. Both concepts go through a huge "Patriarchy" pipe, but one side is titled "Privilege" leaking trails of "Cisgender Privilege" and "Male Privilege" into the bucket of "Cisgender Men". This means that cisgender males receive privilege from the patriarchy. The opposite side of the "Patriarchy" pipe titled "Oppression" trickled to "Transphobia" and "Misogyny" followed by an adjacent pipe labeled "Transmisogyny" depicting the additional path of oppression that transgender women traverse in society. Unfortunately, all the water from these routes drip into the buckets of "Transgender/Genderqueer Folks", "Transgender Women/Transfeminine Folks" and "Cisgender Women" highlighting that those identities are oppressed by the patriarchy. These diagrams were very innovative and got the creatives juices spinning for all the workshop participants! Flowing with the high-octane energy of space, Hazel and Giana had us play a few rounds of a newly constructed version of Jeopardy. After being split into three groups to answer questions like, "What's pink-washing?", "Who's Bayard Rustin?", "What's whitewashing?", etc. the room exploded in a cacophony laughter, determination to learn more, and spontaneous teamwork across all identities. Caught up in the joy, it felt like game only lasted for a few seconds. We didn’t want the fun to conclude but Final Jeopardy was the last section to complete. On the edge of our chairs, the whole room awaited the final jeopardy question. After a few seconds of good spirited teasing, Hazel finally asked the group, "What was the exact date of the Stonewall riot?". The answer: June 28, 1969! The Team B was the only group to answer the question correctly and they were extremely ecstatic. Since they bet all their points for double or nothing shot-in-the-dark, they won the game with a score of 9,800 triumphing over the A and C teams. Team B was an all youth team, so this was a very noble victory!

After all the workshops were complete, everyone was asked to gather in the common room where we began the day. The T.A.G. hosts asked for individuals to stand in a circle while stating their favorite overall moment of the conference as well as what they gained from the experience. After listening to all the inspiring responses, it was clear that people accumulated a bunch of knowledge. From garnering a new outlook on society to collecting tools to create our own “crawl spaces” to liberate ourselves from the chains of oppression and ignorance, it was honor to be in an environment of progressive academic game-changers!
Posted by The Rainbow Experience at the Attic Youth Center at 1:52 PM 1 comment: