Article: The Preservation of Justice 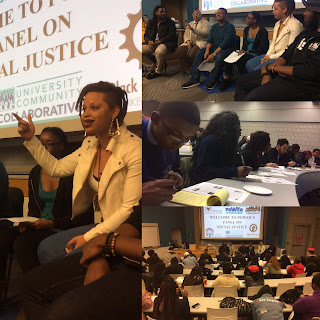 On February 8th, The University Community Collaborative POWER Internship hosted a Social Justice POWER Panel that took place at Temple University. The panel consisted of Mike O’Bryan (advocate of youth rights and project manager of SMASH), TS Hawkins (international author and facilitator for the WERQ Radio and Podcasting Internship at the Attic Youth Center), Shani Akilah (Liberationist and co-founder of the Black and Brown Workers Collective), and Koby Murphy (Youth Organizer with the Philadelphia Student Union), who are avid proponents of social justice.

“I infiltrate "white" spaces", starts Hawkins, helping to set the tone for the panel. She stated she studies how they operate, turns it on its head, and teaches the youth varying ways to navigate in the world. Akilah follows up with “There’s is an art in dismantling what does not serve freedom.” Initially, Akilah went around dismantling systems of oppression but soon learned that “you cannot dismantle without talking about what you are going to build.” Hawkins and Akilah both had very different responses but they’re working towards the same goal. O’Bryan stated “If I'm absent, the uniqueness that I can contribute to you is absent"; that’s why he believes that our personal health is so crucial to any movement we seek to be a part of. When asked what he does to serve social justice in his community, he stated he uses mediums such as photography and music to convey a message. Murphy, also, thinks that creativity is the key to keep people listening to what you have to say.

Whilst discussing prominent social justice issues dealing with the chaotic and changing environment of today, the panelists touched on the current president. For O’Bryan, the world shifted once Donald Trump became a presidential nominee. He says that he was raised in a time where “All of the big lies that covered the world started to crumble…and now we are at a reckoning point.” Hawkins disclosed that she came from a long line of educators and has known for a while that the world is nothing but propaganda, but the recent presidential election reaffirmed some things. “The lowercase KKK were always in place and now they have a mouthpiece.” Everyone on the panel agreed that in these trying times one of our biggest concerns is us; brown folks being resold. Hawkins says “I’m tired of black and brown bodies being sold under different language”, and echoing that same note O’Bryan retorted that “it’s our human capital that’s always been in the hands of other people.” They all agreed that somehow we have to take ourselves back from the systems we’ve been thrown into that continue to oppress.

When the question, “What advice do you have for your students?” was posed, everyone on the panel had something to say. “My advice to you is that for those of you that are for social justice put yourself squarely first.” O’Bryan said. Through his life he learned that his personal health was very important, and without that intact it’s hard to get things done. Hawkins said “My advice is always to honor your worth, and I say honor your worth because you already know it...you are Kings and you are Queens.” Her biggest goal is first and foremost, keeping us alive in a system that is so against us. Then, Akilah stated “Be kind to each other because…imma say it, patriarchy, misogyny, colorism... we are fish swimming in a fishbowl of dirty water, I challenge you to once a day spit that water out.” Akilah continues to connect it to how they found sisterhood in black women even though white supremacy pushes against it with negative images of when black and brown women gather. Murphy’s advice was more goal-orientated, he wants us to constantly ask ourselves “Where is it that I'd like to be?” and constantly work towards trying to get there. In other words, find the light at the end of the tunnel, and claw your way there to make your life worth the struggle!

Posted by The Rainbow Experience at the Attic Youth Center at 6:26 PM No comments: 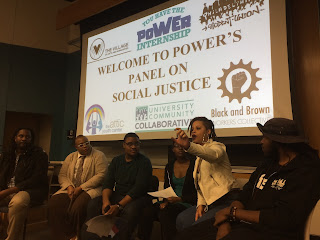 On Wednesday, February 8th, 2017, the University Community Collaborative POWER Internship hosted a Social Justice POWER Panel at Temple University at 3:00 pm. The panel consisted of four captivating facilitators that help black and brown young people from Philadelphia through art, liberation work, and literature while also advocating for social justice. The panelist were Mike O'Bryan, an advocate for youth rights; TS Hawkins, a well-known author, poet, and educator; Shani Akilah, a liberationist; and Koby Murphy, a youth organizer, and musician.

Building up people of color has always been a passion for Shani Akilah and TS Hawkins. As black, queer women, they have always felt the need to give back to their own people. “I grew up in a lineage full of educators", says Hawkins. Using her Education background, she has traveled around the world as a poet, using her voice to send messages about black rights.  Akilah was on the same path forming The Black and Brown Workers Collective to “work toward giving a voice to minorities of color and using art to express yourself in a way that has an impact on the world.” Gathering other people with the same passion, she plans to build up places where black and brown people can work together.

Koby Murphy and Mike O’Bryan both have used their creativity to show the hardships of their life. As an underprivileged child, O’Bryan had but no choice to educate his mind. Being the only one in his family to graduate high school and college, he has used music to show and tell the stories of youth throughout the city. Murphy has been involved with The Philadelphia Student Union since high school. He remembers recording mixtapes and handing them out to different students across the city to spread positive messages. Now being employed by the program that helped him become the artist he is today, he tries his very best to give inner-city kids a platform to be creative and showcase their talents and to stay off the streets.

Throughout the panel, the POWER interns asked a series of questions regarding social justice within the community and how each facilitator connected their own art to making a difference in the youth community. One of the questions to the panelist was, "How do you use and connect your art with social justice topics/issues?" Hawkins responded by saying she "infiltrates “white” spaces"; learning the jargon and mindset while passing it on to black and brown youth so they can know how to navigate throughout the world." Murphy said that using his talents with hip-hop and rap can bring students together and spread positive messages around the city are ways he continues to make a difference.

Although the conversation was based on social justice, each facilitator shared ways that we as black and brown teenagers can make a difference, while also sharing life changing experiences that made them the person they are today. The final question of the panel was, “What advice you would give to the young people?” “Know your worth”, Hawkins said. “Remember your purpose", said Akilah. “Find something and learn something you like”, said Murphy. And finally, “Put yourself and your health first", said O’Bryan.

In summary, the event was perfectly balanced with a spoken word from Hawkins, social justice commentary, and Q&A’s from the audience that toggled between this past election to college. The event opened the eyes of many inspiring artists, photographers, film producers, and journalists. With the advice given from the panelist, there should not be anyone, that was in that room, that left feeling uninspired and not driven for success.
Posted by The Rainbow Experience at the Attic Youth Center at 5:59 PM No comments: 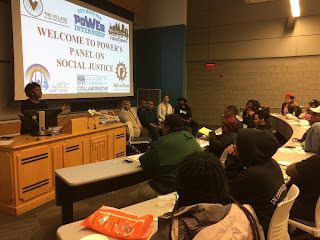 On Wednesday February 8th, 2017 the University Community Collaborative POWER Internship hosted a Social Justice POWER Panel at Temple University. The panel was for people to ignite an intellectual conversation about the current plight of minorities living in the United States. On the panel was TS Hawkins, an international poet and author/facilitator of the WERQ/Radio Podcasting & Youth Making Media Internship at The Attic Youth Center; Shani Akilah, co-founder of the Black and Brown Workers Collective (BBWC); Mike O'Bryan, an advocate for youth rights and social change; and Koby Murphy, a youth organizer with the Philadelphia Student Union.

To start off the panel, Hawkins performed her poem, #SuiteReality; this poem spoke about the struggles of young black girls in society. After Hawkins’ performance, the moderators began to ask the panel questions. The first question posed to the panel was for them to explain how they used their art form to bring awareness to social justice. Akilah answers, in their big and powerful voice, “I dismantle what does not bring freedom. To dismantle, I practice the art our ancestors had of drumming, to hold on to my history and culture."  The audience applauded to their answer. Hawkins responds, "As a black, queer, woman living in this nation, I knew the world was filled with propaganda but I didn’t realize how complacent I had become until Trump was sworn in. What gets me through this time is channeling my art to be a protector for my students and motivating them to paint the world the way they want to see it.”

Another short answer quote from Hawkins was, “I love to infiltrate “white” spaces…” We took this to mean she wants to show society what she's really capable of. She's tired of having to prove herself over, and over again to go through an unnecessary amount of steps to get to where she has to go, only to be shut down solely due to her skin tone.  Akilah, further mentioned that they “cannot dismantle without talking about what you are going to build; there is art in dismantling.” They said growing up that they “did not feel like they had a tongue to speak, like it was snatched.” Akilah wanted to build a space where minorities can speak freely and take a direct action against white supremacy in a positive way; that's why they created the Black and Brown Workers Collective. In conclusion this social justice panel was developed by great youth role models; giving an immaculate sense of acceptance and leadership for other youth of color.

Posted by The Rainbow Experience at the Attic Youth Center at 5:41 PM No comments: 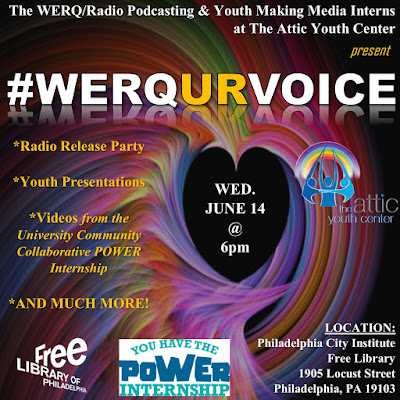 The WERQ/Radio Podcasting & Youth Making Media Interns
at The Attic Youth Center
want to celebrate all their hard work!

As an added bonus, they have partnered with
The Free Library of Philadelphia
&
The University Community Collaborative
POWER Internship Program
from Temple University!

WHAT TO EXPECT:
*Radio Release Party
*Youth Presentations
*Video Presentations from POWER
*Light Refreshments
...and so much MORE!!!
Posted by The Rainbow Experience at the Attic Youth Center at 4:55 PM No comments: