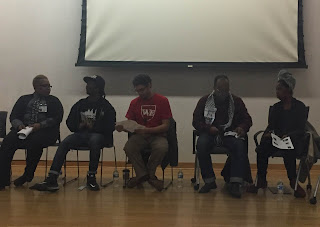 On February 10, 2016, we at the Rainbow Experience were invited to a social justice
panel at Temple University Ritter Hall in the Walk Auditorium.The panelist included TS Hawkins
renowned international author, Ociele Hawkins a loveable youth organizer involved with the
Philadelphia student union, Kashara White, a revolutionary black writer, Ismael Jimenez a
educator in the Philadelphia community for the past 10 years and Anthony Monterio who taught
African American studies at Temple University for 10 years as well. The panels topics included
the Black Lives Matter movement, identity erasure, the educational system, and a prevention of an 800 million dollar prison. The main message being, "why is power important"? This simple question exposed how the system is against minorities with topics like the school to prison pipeline, which Ociele touches on a lot with his continuous mention of his prevention of an 800 million prison.This panel in our opinion was assembled to awaken ignorant young minds to the ongoing social issues. Several hot topics were introduced as questions were asked by the moderators. The question that stood out the most to us was “how’s our condition as Black and Latino people today modern day slavery? Why are minorities born suspects?” To this TS Hawkins was quoted saying “For me it’s no such thing as modern day slavery; slavery never left”, which we thought was such a powerful and truthful statement.

Others on the panel gave some serious insight on the ongoing struggles of the black community and all its factors within a white supremacist society. Kashara is a panelist we would like to focus upon, as she adds on to the concept of modern slavery with “to be involved in the situation but be excluded and victim to that situation, yes we’re still in slavery”. She also talked of how our oppressors are no more intelligent, creative, or capable than we are in fact we are the only tools we need for our liberation; her vision and spunk inspired us to make a difference and change the social stigmas of the Black community set by white oppressors. It is evident that a lot of Latino and Black youth are blind to the systematic racism and modern slavery, to which the panelist were asked at what point did they become “awake”? Kashara giving a small story in response to how she wasn’t political growing up, was middle class and not conscious of Black issues. We believe this is typical and usually expected. Kashara continues to say that she’s very goal oriented and mainly focuses on solutions than just letting the issue be existent. She's quoted saying “injustice radicalized me” she continues “we’re insane to think the same system that oppresses us, will help us” ,“A lot of people think radical they have ideas and theories but don’t do anything.” She isn’t called revolutionary for no reason and in our opinion she’s completely right. Modern day segregation with African Americans is prevalent; we do it to ourselves with #teamdarkskin and #teamlightskin just how it was 400 years ago we’re
segregating ourselves. If we’re all one community then why separate ourselves by the tone of brown we are?" This ties into a question that was offered up to the panelist "how do we rebel against the oppression? Which they collectively answered with “bring the black community together, all aspects of it” and “be aware of black people with white supremacist agendas”. A follow up question posed by youth audience member Damien Walker was “how do I bring people together that simply don’t want to listen” which the panel answered with “there’s a step by step process to which the ignorant want you to go through to avoid resistance; push on regardless”. Ultimately we loved this performance of “radicalness” and it feels great to see a display of awaken,committed , and proud black people speaking up against their oppressors.
Posted by The Rainbow Experience at the Attic Youth Center at 2:28 PM